Product Condition: The XT SL-M8100 Trigger Shifters is in Like New condition. Shifter is in 'like new' condition. Was previously owned for approximately 1 month. Shifter looks to be new but the packaging is damaged. Sold as-is. All warranties void.

Along with the release of Shimano's workhorse 12-speed mountain group comes updated shifters as well, offering precise and responsive shifting for improved control on the trail. Featuring refined ergonomics and a lighter shifting action, the new XT SL-M8100 Trigger Shifters provide a claimed 20% quicker lever access and require 35% less shifting force than the previous generation. They also get a rubberized thumb paddle for improved grip on the downshift, with the paddle offering just a bit more surface area than XTR. The key change, however, is the introduction of an I-SPEC EV version of the shifter, which lets riders customize the ergonomics by allowing 14mm of lateral adjustment and 20-degrees of rotational adjustment, making it easy to find the most comfortable position for your hands. That being said, you'll want to stick with the standard handlebar clamp version if you aren't running Shimano brakes.

Perhaps our favorite feature of the XT shifters is Shimano's proven multi-shift function that lets you shift up two gears at once if you need to accelerate quickly on a downhill section of trail. The second click is just a bit firmer than the first one, which prevents any accidental overshifts. We also appreciate the two-way release that let's you choose between pushing or pulling the trigger to initiate an upshift, with the pull function being especially useful in sprint situations.

If you're running a double chainring up front, the left shifter features a Rapid-Fire Mono shift lever that lets you shift both up and down with a single thumb lever. You push it once to shift from the small ring to the big ring. To go the other direction, you give it a little push forward until it clicks, or you can pull to release it and the chain moves back down to the small ring.

Hello, is this a Right-Hand shifter for the 12 speed REAR derailleur? Thanks.

Hello, this a left hand shifter. 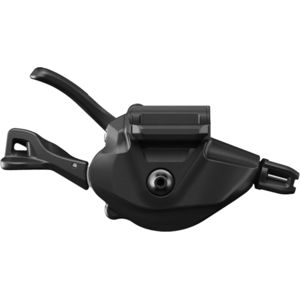