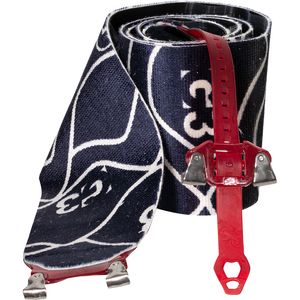 Much like mountain goats, Backcountry Gearheads like to spend as much time as possible on the top of, well, mountains. To help get us up the steep and icy skin tracks that'll take us there, we collaborated with G3 to create the Backcountry x G3 High Traction Splitboard Skins.

These high-traction skins serve up the billy goat-like grip desired for alpine ascents on two halves of a snowboard. This extra traction allows you to climb up steeper, more direct routes, even on hardpack snow. That way you're spending less time skinning and more time slashing powder, which is something we can all agree with. G3 added a self-aligning tip attachment that's low-profile and a twin-tip tail attachment for a secure, stay-put fit. Plus, the solvent-free adhesiveâ€”which G3 claims is the toughest on the marketâ€”won't pollute the snow or mess up your freshly waxed base.

QUESTION: Have these skins been trimmed and do they come with the trimming tool?

ANSWER: The skins have not been trimmed and the trimming tool will be included. Image of the items has been uploaded to the listing.